The historical photographs and factual history of the parish’s early years that follow (though, admittedly, greatly condensed) were drawn from the book, “Our Lady of Angels Church, Our Golden Jubilee 1922-1972″ which was published in commemoration of the 50th, or “Golden” anniversary of the Parish. The Memorial Book Committee, whose responsibility it was to place between the covers of a thin book the long history of a parish that was then half a century old, is to be congratulated by all Our Lady of Angels parishioners. It is only through the efforts of such loving, caring and hard-working people that history is set down for later generations to study and enjoy. Their efforts were most successful.

The authors of the Golden Jubilee book wanted to make very clear that the parishioners of Our Lady of Angels Parish in 1972 had the same responsibilities as the early settlers – “to give thanks to God for our parish, keep her heartbeat healthy and insure a continuous growth for the pages of history to record”. As current parishioners, we bear a similar responsibility to posterity – as well as to the future. We owe our forefathers and foremothers a debt of gratitude for the hard and loyal work that resulted in a wonderful parish that we can all be proud to call ours. But this growth must continue and it is the duty of each and every one of us to contribute to those efforts. It is only by knowing, and respecting, the efforts of those who came before us, that we can contribute to it.

The beginning really wasn’t 1922. In fact, the roots of Our Lady of Angels Parish can be traced much farther back, all the way back to the arrival in this area of the Franciscan Fathers. The Franciscan Province of the Sacred Heart, headquartered in St. Louis, Missouri, established two parishes in Cleveland: St. Joseph’s at East 23rd and Woodland Avenue, and St. Stanislaus on Forman Avenue. Some time after the turn of the century – the last century! – property was obtained on Riverside Drive, bordering the Rocky River valley and just a few blocks north of what is now known as Kamm’s Corners. The St. Joseph Sisters and the Poor Clare Nuns also purchased properties in the same area at about the same time.

The property on what is now known as Rocky River Drive was purchased by the Franciscans with the intention to establish a seminary and, eventually, a parish for the people in the area. With permission of the Bishop of Cleveland obtained, the plan was set in motion. By 1905, a small frame chapel, with living quarters for the Brothers and Fathers, had been built. The chapel, or church, was known as the Church of The Stigmata of St. Francis until July 13, 1906, when it was then dedicated as Our Lady of Angels. The surrounding area was known at that time as Rockport, later to be changed to West Park. This area had been part of St. Patrick’s Parish, an older parish farther south on what is now Rocky River Drive. 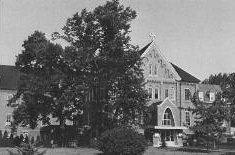 In 1907, Our Lady of Angels Seminary was opened. Serving the Sacred Heart Province and, for some years, the far western province of Santa Barbara, California, it was the house of philosophy and theology for the clerics who were studying for the priesthood. After a while, the Santa Barbara group moved out and the theology course was transferred to St. Louis, Missouri.

In the summer of 1921, Father Linus Koenemund, O.F.M. was appointed the superior of the seminary and friary, more commonly called “the monastery”. On December 23, 1921, the Most Rev. Bishop Joseph Schrembs, D.D., Bishop of Cleveland, requested that Father Linus, as the superior of Our Lady of Angels Seminary, send in an official request for the establishment of a canonically-created parish. Thus, were the wheels set in motion for the creation of Our Lady of Angels Parish.

Apparently, Father Columban was not a man who believed in wasting time, as the first councilmen, or trustees, of the parish were appointed and installed the very same day. Soon after, Father Columban undertook a survey and house visitation of his new parish, discovering that he had 82 families under his care. Father Columban then began to address the spiritual needs of his new flock. In January 1923, the first four of what would become numerous parish organizations were established: the Holy Name Society, the Christian Mothers’ Society, the Young Ladies Sodality and the Junior Holy Name Society.

At the time of its formation, Our Lady of Angels took a well established section of the mother parish, St. Patrick’s. It was agreed that the new parish would indemnify the mother parish in the amount of $5,000 – at the time, a princely sum! However, this amount was paid almost immediately, thanks to a bazaar which was held in the West Park Town Hall. The proceeds of this bazaar – which was successfully orchestrated by the ladies of the parish, under the chairmanship of Mrs. Lucy Arth – allowed the new parish to satisfy the debt it owed to St. Patrick’s.

Father Columban was not a young man when he was appointed as pastor, and the problems and concerns inherent in the birth of a new parish, took their toll on him: he resigned just one year after the establishment of the parish. Though Father Columban was greatly missed, Our Lady of Angels was not left without strong and dynamic leadership.

Enter a man who would come to be affectionately known simply as Father Linus.

Because Father Columban’s resignation came during the winter of 1923, a temporary pastor was needed until the following summer when a permanent pastor could be appointed. That temporary pastor was Father Linus Koenemund, O.F.M. His “temporary” assignment, initially intended to last only six months, from December 1923 until the following summer, spanned more than three decades. It eventually ended thirty years and six months later, during the summer of 1954 when he was transferred to a less demanding position in Riverton, Illinois.

Father Linus was a holy and learned priest, as well as a tireless worker. He endeared himself to the congregation over the years due to his total dedication to, and love for, his flock. Father Linus is generally remembered as a strong leader and one of the guiding lights of the early years of Our Lady of Angels Parish.

Before Father Columban resigned, he had started a parish school. Ground for the building which would house this school was broken on July 1, 1923 and the cornerstone for the new Our Lady of Angels School was laid on August 5, 1923. However, during the early years of Father Linus’ stewardship, the parish saw continuing growth as more and more Catholic families moved into the area and, as a result, in 1926, the school was expanded, with four more rooms being added to the original building.

Just a couple of years later, on June 17, 1928, the frame church was enlarged and renovated. However, growth in Our Lady of Angels Parish continued unabated over the years and, in 1940, the decision was made to erect a new church. With ground having been broken on March 19, 1941, the new church rose from the ground magnificently. Less than nine months later, on December 8, 1941 – the Feast of the Immaculate Conception and, coincidentally, the day following the attack on Pearl Harbor – the new church was dedicated. A portion of a photograph that was included in the Golden Jubilee Book reflects the new and terrifying reality with which parishioners – as well as the rest of the world – suddenly found themselves confronted. Faces that should have been joyful and proud are unsmiling, and clearly concerned. That morning, perhaps more than at any time in their lives, Our Lady of Angels parishioners, though obviously concerned, must have felt the tremendous power and healing of God’s love in the beautiful new structure they had just built to worship Him.

Though not completely finished, Midnight Mass was held in the new church on Christmas Eve, 1941. Following the Christmas masses, services were once more conducted in the old church to allow for the uninterrupted completion of the new building. By Easter 1942, the new church was completed and, soon after, the small frame church, so beloved by all, was razed.

World War II would claim an assistant priest, Father Elwin Bina, O.F.M. as well as thirteen of Our Lady of Angels’ sons. Their names are inscribed on a plaque which hangs on the south wall near the front of the church. Like the rest of the country, Cleveland – and Our Lady of Angels – saw tremendous population growth following the war. As the city continued to grow, more Catholic parishes were needed. St. Mark Parish, to the north of Our Lady of Angels and St. Mel Parish, to the east, soon became reality; St. Mark on June 14, 1945 and St. Mel, just five months later, on November 12th. Approximately 150 families became members of these two new parishes, but this loss was eventually offset by the influx of new families moving into the parish.

By the mid-1950′s, Our Lady of Angels found itself saying a sad, but grateful goodbye to Father Linus. Although transferred in 1954, Father Linus eventually returned to Our Lady of Angels Parish in 1963 to spend the last five years of his retirement among the people he so dearly loved – and who so dearly loved him. In 1964, he celebrated his sixtieth year as a priest and on December 27, 1968, Father Linus Koenemund, O.F.M. passed away in his sleep, one month shy of his 91st birthday.

An integral part of any vibrant parish is its educational program. Our Lady of Angels is no different. This reality was reflected in the immediate creation of a school by Father Columban soon after his appointment as pastor, and the school continues to reflect the parish’s commitment to its youth by providing a quality education, both secular and religious.

In the latter part of the 19th century, the Baltimore Council urged that every parish have a parochial school. As noted above, Father Columban took this to heart and began Our Lady of Angels school as one of his first acts as pastor. The first school year was 1923-24 and, although the building was not yet ready for immediate occupancy, the school officially opened on September 10, 1923, with one class held in the chapel and the other two classes meeting in the reception rooms of the monastery. Total enrollment was 103 – 70 boys and 33 girls. Approximately 30 of the children were from St. Vincent de Paul Parish.

The first ten years of the school’s existence saw that enrollment increase to more than 400. The number would eventually reach to more than 1,100 in the 1960′s before leveling off and decreasing over the past 30 years. For years, the Sisters of St. Joseph, whose Academy for girls is located within the parish, just north of the church, were in charge of the educational program. Thousands of children received a quality education thanks to the selfless efforts of the Sisters of St. Joseph. Over the years, lay teachers replaced the sisters and, today, Our Lady of Angels students are taught entirely by lay instructors. The quality of education offered remains high, however, and the school has an excellent reputation in the greater Cleveland area.

Tidbits to Mull Over

While certainly not a complete history of the early years of Our Lady of Angels Parish, it is hoped that a “flavor” of the times has been conveyed. Like all worthy things in life, the growth of a parish does not come without growing pains. Through times of turmoil and national crisis, Our Lady of Angels has persevered and even prospered. Through the hard work and prayers of thousands of parishioners over the decades, Our Lady of Angels has established itself as a model of the loving and caring Catholic parish.

Friday of the Third Week of Ordinary Time